Arriving in a tiny rural hamlet near Lands End yesterday, I was really excited. The only things we could see were a tiny ancient church, a farm, and acres of beautiful green fields. 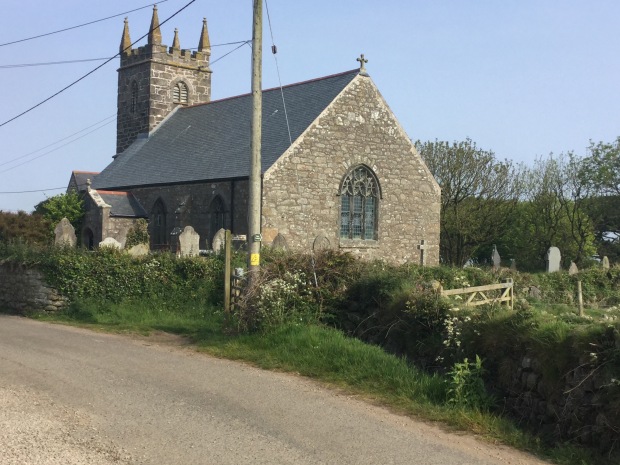 Our host graciously explained that the property we were renting had been in her family for decades. Originally the old schoolhouse, other uses had included a machinery store, and a church hall. She explained that the following day was a historic day for the little Church opposite. For the first time ever, 4 local churches were meeting as one in this village chapel, for the first of 4 combined services. Despite her having met the children, in a moment of haste, she invited us to the service at 10 am, and we accepted. The deal was done.

This morning, everyone was smartly dressed for the occasion. All 4 of the little darlings then managed to spill a variety of substances all over their clothes, including weetabix, apple juice and charcoal from last nights BBQ. Half a packet of baby wipes later, we crossed the road to the church. It is tiny, but really beautiful. As we had arrived a little early, I suggested a walk round the ancient graveyard. That’s when it all started to go wrong. It was around the time that the worshippers started to arrive, that I lost whatever slight control I previously had over the little darlings. As our host arrived, she managed a gracious smile despite the fact that Patch was swinging round a beautiful Celtic headstone as though it were a roundabout, and the twins were digging with great determination using their bare hands to try and uncover dead body bones (apparently they we to be for the dog accordingly to Emily). Lucy lay sprawled across a headstone yelling the letters and numbers she could recognise, and I was trying frantically to collect them all. Gesturing to the large food bag I was holding resulted in a collective scream of “Food!” Before they flew through the church doors, much to the astonishment of the mainly elderly parishioners.

Scuttling past the minister on my way in, I asked quietly whether this was a child friendly church as otherwise, I thought we had better retreat now. ‘Of course we are child friendly!’ he bellowed. ‘They are free to run around as they please!’ While I could see he meant it truly, I did not get the impression that his flock agreed. I also suspected it had been a long time since he had seen kids like mine in church. Kids running around was likely to be the least of his worries. Scaling the bell tower or attempting to bathe in the baptismal pool seemed much more likely.

As, by this stage, we were now late, we got the front row. In full view. Of the entire church. Which it turned out was full for the first time in, perhaps, decades. No pressure then Mummy!

We made it to the first reading, about 4 minutes in. Then, the little darlings remembered that I had packed sausages. There were lone sausages, sausages in baps, in wraps, with ketchup and mayo. In fact every possible combination to try and keep the peace. Then there was the fizzy orange to wash it down. This was not ideal in the front row. The cry for sausages went up after the first sentence of the reading. There were gasps, giggles and coughs. The reader sped up. The yells got louder, and included specifics. ‘I need ketchup in mine!’ ‘I hate Mayo, where’s mine?’ The minister looked sympathetic, the ladies behind giggled, and others glared. It took a few minutes to dole out the orders, but then, we earned relative peace for at least two minutes. Then the climbing and jumping started. At first, they just climbed onto the kneelers. However, this quickly escalated to climbing the whole pew, then over the top. Quickly tiring of that, they moved on to jumping. The hymns apparently did not appeal. As ‘Morning has broken’ came to a heartfelt conclusion, Twinkle twinkle struck up with great gusto, followed by competition from the Old MacDonald camp. So heartfelt were their differences, it was like a toddler choral pro-EU/Brexit rally which ended in blows only a few moments in.

As the sermon started, the minister graciously praised those who bring small children to church. He noted the decline, and laughed that it was great to have people younger than himself in church. He told the kids they would get a biscuit for every sleeping parishioner they discovered during the sermon. It was a really great try. It had a whole 2 minutes of impact. Then sausage wars started. Sausages were yelled for and traded. At one point in he sermon the minister actually laughed as on making a serious point he turned to find twins pointing foil wrapped sausages at him from the top of the pew. To give them their dues, the congregation held it together.

We made it as far as holy communion. Our own went fine. It was when the dog, obviously elderly, but clearly a regular churchgoer, went up for communion, that it all fell apart. The dog knew the routine by rote. Obviously it had not been confirmed as it chose a blessing over the wafer (or maybe it just didn’t like wafers). Either way, it was duly blessed, and made it’s arthritic way back down the steps. The dog had been momentarily attracted by the delicious, if unusual, scent of sausage in his church. Against his better judgement, he edged closer. Just then, a twin chasing the dropped end of a sausage crawled under hubby’s feet.  Hubby tripped, and the hymn book in his hand launched over the pew landing squarely on the holy canine. The entire historic service had turned into a complete circus thanks to the invitation of these last minute guests. I should add that the dog was entirely unscathed, just a lot put out!

As we prepared to exit the church at high speed following the hastened end of the service, it was with great alarm that I saw several of the congregation approach with purpose. It was just as I yelled ‘Run!’ at the kids that I saw they were brandishing…biscuits! It turned out that the desire to see young people in the church was in fact widespread. While in our own heads, and by our standards, we had destroyed the sermon, it turns out we had inspired hope for the future. In a community where youth attendance  has severely dwindled, we had apparently shown what the future could look like.

Good luck to them, that’s what I say. I hope they win. Our faith is not theirs, and visa versa. They welcomed us to their special day though, and of course we would welcome them back. We happily joined them, and were ever so grateful for their inclusion. I think it meant a lot to each of us. We will continue to worship in our own faith, thankfully supported by a community and very active faith school. And I will continue to survive parenting 4 little darlings using wine (Listen guys, Jesus turned water into wine. There can be no better endorsement! ). What an unusual but ace experience. What a wonderful world!